St. George's Cathedral is an Anglican cathedral in Georgetown, Guyana and is one of the tallest wooden churches in the world, at a height of 43.5 metres (143 ft). It is the seat of the Bishop of Guyana. 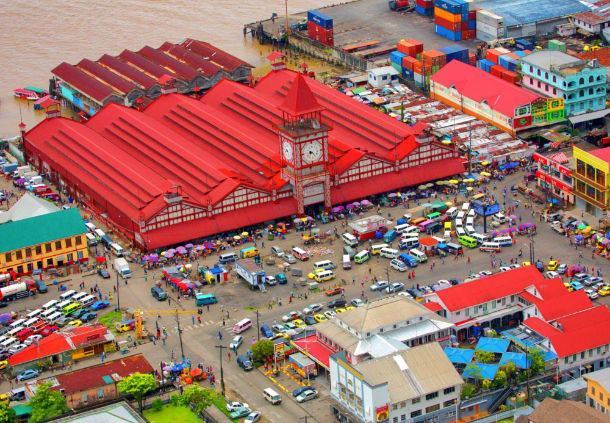 In 1842, the Georgetown Town Council designated the current
location of the market on Water Street, officially recognizing it as a market
despite the fact that it had served such a capacity for quite some time. 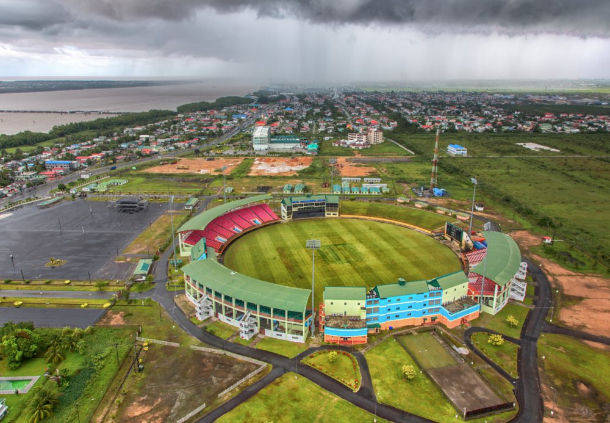 The stadium was built specifically to host Super Eight matches in the 2007 Cricket World Cup held in March and April 2007. 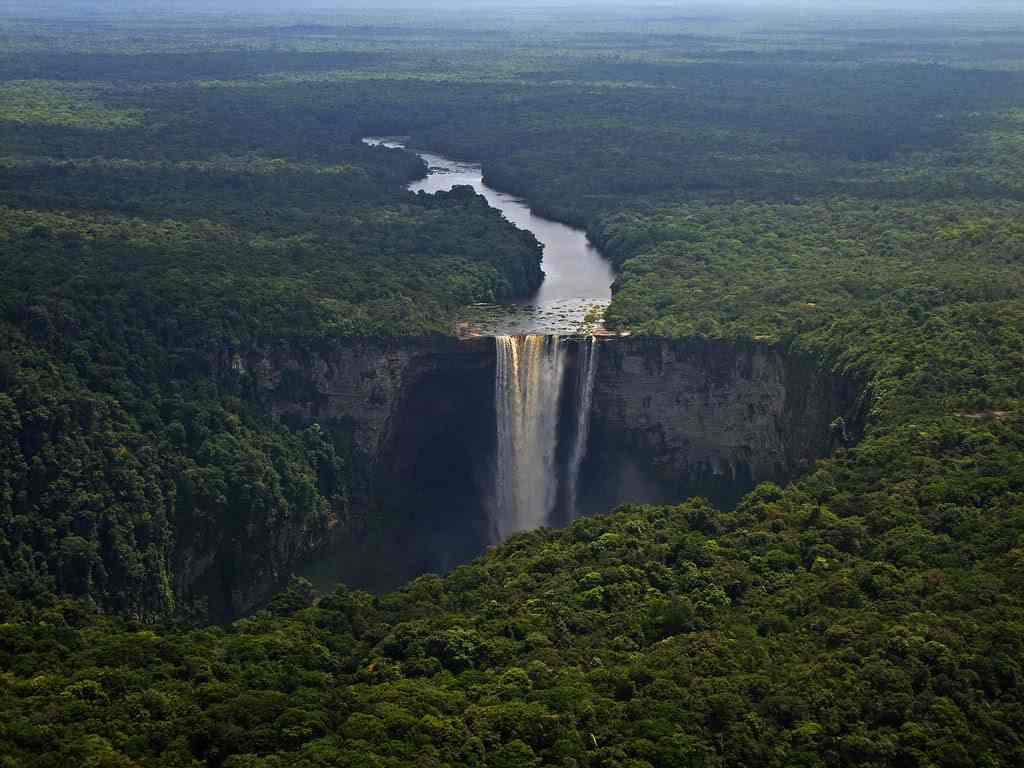 Kaieteur Falls is the world's largest single drop waterfall by the volume of water flowing over it. Located on the Potaro River in the Kaieteur National Park, it sits in a section of the Amazon rainforest included in the Potaro-Siparuni region of Guyana and claimed by Venezuela as Guayana Esequiba. It is 226 metres (741 ft) high when measured from its plunge over a sandstone and conglomerate cliff to the first break. 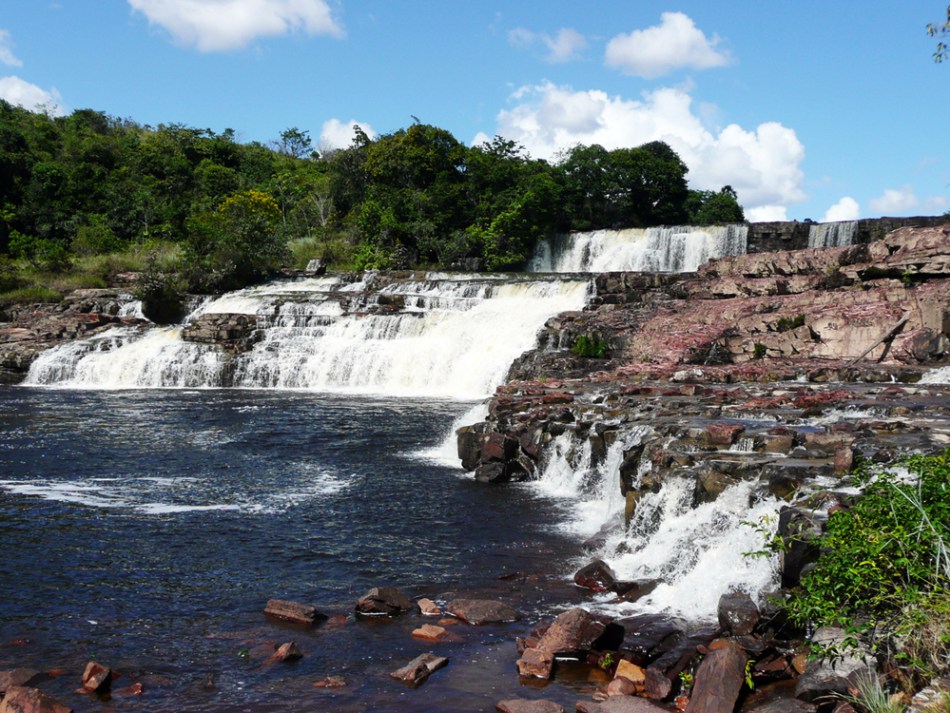 The Orinduik Falls lie on the Ireng River, a highland river that thunders over steps and terraces of solid red jasper (a Semi Precious Stone) on the border of Guyana and Brazil before merging with the Takutu River and into Brazil to join the Amazon River. 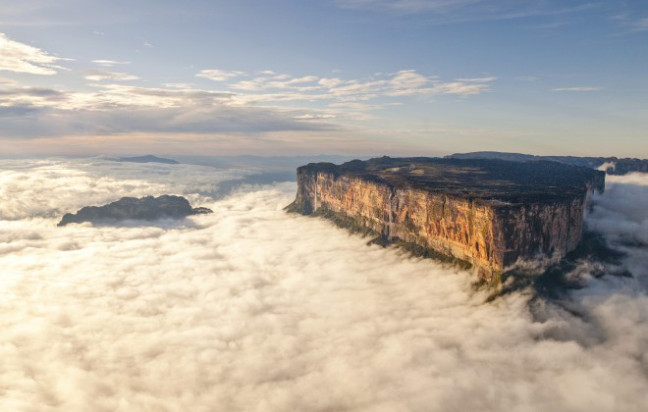 The Pacaraima or Pakaraima Mountains (Portuguese: Serra Pacaraima, Spanish: Sierra Pacaraima) are the mountains of Guyana, lying in southwestern part of this country and shares borders with Brazil, Guyana, and Venezuela, extending from west to east for over 800 kilometres (500 mi). Its highest peak is Mount Roraima at 2,810 metres (9,220 ft) above sea level, surrounded by cliffs 300 metres (980 ft) high. 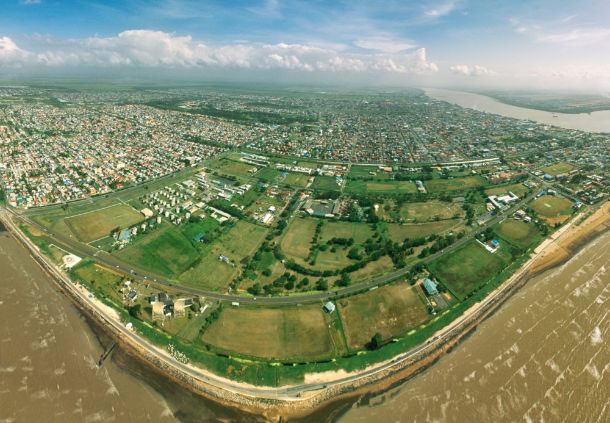 Georgetown is the capital of Guyana, located in Region 4, which is also known as the Demerara-Mahaica region. It is the country's largest urban centre. It is situated on the Atlantic Ocean coast at the mouth of the Demerara River and it was nicknamed 'Garden City of the Caribbean. 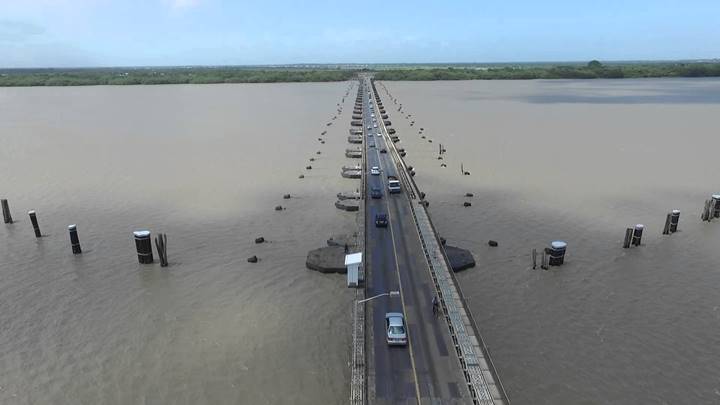 The Demerara Harbour Bridge is a 6,074-foot (1,851 m) long floating toll bridge. It was commissioned on 2 July 1978. The bridge crosses the Demerara River 4 miles (6.4 km) south of the Guyanese capital Georgetown, from Peter's Hall, East Bank Demerara to Schoon Ord, West Bank Demerara. There is a pedestrian footwalk. A raised section lets small vessels pass under. A retractor span lets large vessels pass. Construction of the Demerara Harbour Bridge began on 29 May 1976. Construction assistance was provided by the British Government, but the basic design was by a Guyanese, Capt. John Patrick Coghlan. The bridge was only designed to last 10 years, yet it is still going strong.[1] Toll is collected only in one direction of travel even though the bridge handles one lane of traffic in each direction. Traffic going west to east pays no toll.
The bridge is exactly 1.25 miles (2.01 km) long and has 61 spans. A high-level span provides a horizontal clearance of 32.0 metres (105 ft) and a vertical clearance of 7.9 metres (26 ft) to let small craft pass at all times. To let large craft pass, two retractor spans retract fully to leave a horizontal clearance of 77.4 metres (254 ft). 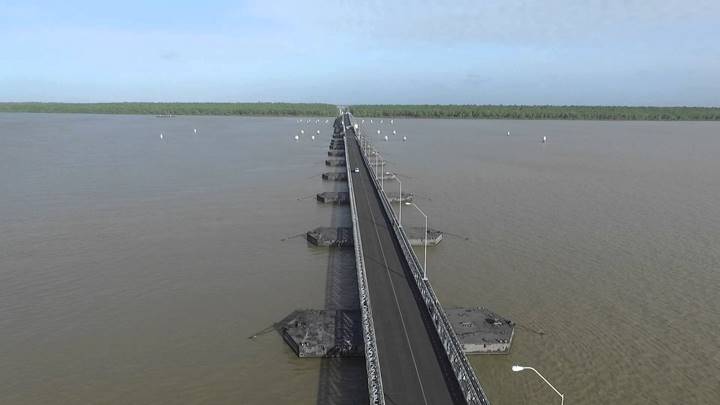 The Berbice river bridge was designed by a European Consortium Bosch Rexroth B.V. and Mabey and Johnson at the cost US$38M.The bridge connects East Bank of Berbice at Crab Island to West Bank at D’Edward Village. The length of the bridge is 1.57km and it is a floating bridge. The bridge is also retracts once per day to facilitate marine traffic.The Bridge was opened for commercial operation in December 2008. The principal activity of the company is to operate the Berbice River Bridge as a toll bridge, securing revenue to cover all operating and maintaining costs, repayment of financing and debt servicing obligations. The Berbice Bridge Company Inc. (BBCI) plays the roll of collecting tolls and facilitating vehicles crossing the Berbice River Bridge and vessels transiting through the retractor opening and under the high span. The company also discharges its corporate responsibilities and, more importantly plays an integral part in the development of education, sports, while supporting national events and making donations to, charitable and non-charitable organizations in close proximity to the bridge, as well as region 5 and 6. The company has also sponsored events in other counties and as far as the hinterland.